Homepage / information / Sentivate - The Future Of The Internet - ELI5

In order to utilize the centralized and decentralized components, the project continues the development of the Gravity browser. The browser is a tool to navigate the Universal Web and World Wide Web while integrating the unique components such as a universal identity system, universal domain system, and VIAT while using their proprietary data transport protocol.

Sentivate addresses the following issues directly: the looming bandwidth crisis, outdated protocols, broken DNS, lack of accountability, lack of identity, reactive security, and web categorization. Web user demands have changed and data requirements of the web have grown. With the IoT world right around the corner, the current form of the web will face bandwidth issues. HTTP is a major bottleneck due to its chattiness in the heart of the issue being TCP and latency because of the way data is transferred through a multi-step process between the receiver and the sender of data. All of this culminates in billions of dollars wasted cumulatively throughout the world while relying on digital infrastructure incapable of scaling to our global demands.

Importance of seconds in page speed

Improving page loading time with a couple of seconds can make a massive impact on your business.

Even by a few hundred milliseconds, can affect your business bottom line. Here are some real-life examples: 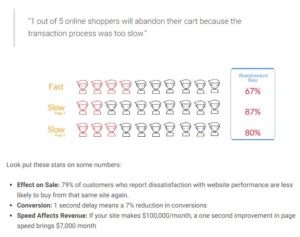 Disruptions are sometimes applied to specific services like social media, instant messaging, or search rather than the whole Internet ecosystem. Blocking these services which people and businesses use daily has immediate impacts. Such disruptions make it more difficult for people to communicate with friends and family, discover products or obtain information generally. Businesses lose visibility with customers, and opportunities to interact with them, to obtain feedback, and to receive orders.

Disruptions that are applied recurrently or last longer magnify the impacts on productivity arising from temporary shutdowns. They increase uncertainty in the business environment and force firms to move towards less optimal business models or more expensive suppliers that are not affected by disruptions to Internet connectivity. In response to this uncertainty, businesses may reduce investment and face higher costs.

The impact of Internet shutdowns is not widely researched and there are clear data challenges to this exercise. As far as this report is aware, this study constitutes the first effort to analyze the economic impact of Internet disruptions across countries with different connectivity levels under a common framework. Quantifying the impact of very specific types of disruptions would require a level of granularity which is beyond the information publicly available.

Estimated impacts of temporary disruptions to the Internet ecosystem

Globally the impacts that arise from disruptions in the Internet ecosystem vary significantly by the means, length, and what target is disrupted. Another factor to consider are what level a country already has attained in regard to levels of internet connectivity. A country with a very high level of broadband access like any industrialized country from the likes of the G7 or otherwise would experience huge losses over even a small time frame of disrupted services in our modern digital and global economy. This is even worse for any emerging markets as well. Even though they aren’t as reliant on servicing their economy through huge segments of the Internet ecosystem, that doesn’t mean there aren’t segments that operate in it. In fact, it is even more detrimental as it stymies growth in any industry that is looking to expand and rely on reaching the wider world through the Internet. This limits economic opportunity in areas that need it most and perpetuates a host of economic issues from limiting innovation, trade, and communication to name only a few.

Deloitte found that the average per day impacts of a temporary shutdown on the internet grows larger as the level of connectivity and GDP increase. As mentioned above, when there is more of the economy involved and reliant on the internet there are major losses experienced with any disruption. Just how bad numerically are these losses though? Deloitte estimated that for a highly connected country, the per day impact of a temporary shutdown of the internet and all of its services would be on average $23.6 million per 10 million population. Examining both lower level internet access and speed, the average is $6.6 million and to $0.6 million for medium and low connectivity economies.

The magnitude of these impacts can be illustrated further with some examples: 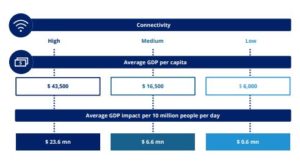 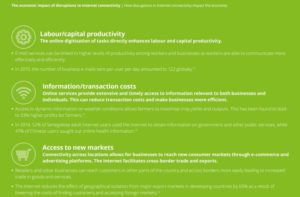 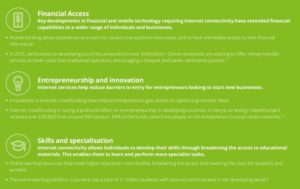 The Sentivate Network has a hybrid topology that incorporates both centralized and decentralized topologies and offers the infrastructure for the Universal Web and VIAT.

This Universal Web is built from the ground up and includes a massive change to the data transfer protocol. UDSP is geared to replace both HTTP and TCP entirely leading to a simple zero round-trip connection between receiver and sender resulting in minimal latency.

The first step in the construction of the Universal Web is to replace HTTP entirely with the Universal Data Stream Protocol. UDSP is a UDP based low-latency, real-time, bi-directional, encrypted, and reliable Data Transport Protocol.

On the Universal Web all communication, streaming, or transferring of any type of data utilizes UDSP. When visiting a site on the Universal Web UDSP is the protocol used instead of HTTP. Specific UDSP client and server modules are required to visit or host a website on the Sentivate Network. UDSP is the foundation and lifeblood of the Sentivate Network.

UDSP is capable of dynamic reliability on a connection level, or on a per-request basis which is agreed upon between the involved parties. UDSP enforces encryption which means all UDSP connections are encrypted by default, with no exceptions. UDSP supports IPv6, Multiplexing, and Multihoming. UDSP relies on cryptographic keypairs and XChaCha20 to establish a connection.

UDSP prioritizes the real-time web and dispersed computing. Since connections are bi-directional streams and less chatty this makes the network less clogged and ensures low-latency for the livelihood of the connection This makes UDSP a highly useful protocol where high-throughput, low-latency and high reliability are required. Due to UDSP’s programmatically dynamic nature, it’s efficacious in situations of highly variable and or degraded network connectivity.

UDSP has optional puzzles included in the packets which allow providers and solvers to earn VIAT. Puzzles can vary and thus the puzzles are a Dynamic-Proof-of-Work.

What is the difference between a HTTP and UDSP connection?

For connections to a server where the client and server possess a pre-shared key (PSK) the client may choose to encrypt early data under this key and send it along with the ClientHello. This allows the server to respond immediately with the requested data after its own ServerHello/EncryptedExtensions/Finished messages. This cuts an entire round trip off the communication: zero round trip time. In a mobile environment, this may save a significant amount of time (hundreds or even thousands of milliseconds). The PSK may be obtained out-of-band, but typically it is retained from an earlier handshake. Early data communication is generally limited to communicating with servers that the client has previously spoken to.

The Universal Identity System contains important components for registration and identification on the Universal Web.

This new identity system removes the need to create a user login and password. Instead, it acts as a kind of internet passport for individual users. By encrypting credentials they are kept secure. Creating this functionality at a base level ensures that this will be very difficult to compromise.

Imagine your own cryptographic passport for single sign-on and access to funds.

This system filters out various attacks on websites like Sybill attacks and faulty certificates. Sybill attacks are used to force a network to execute unwanted commands, potentially causing a disruption in service. These kinds of attacks can also be used to inject malware into websites that can infect user computers.

Bringing these concepts together is identity certificates. These identify the user Sentivate’s blockchain technology. The main benefit is this allows different permissions to be created per device. An example could be that a user’s home computer would be authorized to make Amazon purchases but not a work laptop. In this way, if the laptop is lost or stolen, it would not be able to be used to make purchases on your behalf.

Why a hybrid web?

Utilizing a fully decentralized web is infeasible because of how much the world relies on speed and availability of bandwidth. The global economy cannot wait for block times and data to propagate through the layers of nodes yet the web we have today has major security concerns the aspects of decentralization could fix and also some of the core technologies of the modern web are outdated and due for an upgrade.

The Sentivate web which is called the Universal Web is centralized focused and not blockchain-based but enhanced by decentralized components. This Universal Web is built from the ground up and includes a massive change to the data transfer protocol.

You want a fast browser, not only will the browser be faster loading pages but it will be safer and with your privacy at the forefront of every interaction you have while using it. It’s your data and no one else has access to it unless you grant it. Identity certificates allow you to go to a site (encrypted) and do a single sign on to a new site or even old site with you never having to go through a full sign up process or sign in. Built-in torrent streaming and the ability to mine VIAT while browsing the web are only a few of the soon to be many features the Gravity Browser has to offer. Stay tuned for further updates as we develop the browser and continue to enhance your web experience.

Sentivate will incorporate a separate network called VIAT and this is specifically for cryptocurrency and smart contract operations. VIAT is a decentralized focus, blockchain-based while being enhanced by centralized systems. VIAT is incorporated throughout the Universal Web, examples are with UDSP through packet puzzles which allow for passive mining of VIAT while browsing the Universal Web also decentralized nodes providing domain certificates have a chance to earn VIAT through their services.

VIAT is designed to be fast, secure, and has some of the lowest transaction fees available. VIAT’s centralized portions can process instant transactions, provide wallet security, and alleviate network congestion when the decentralized network is under heavy load. However, these centralized features are opt-in only allowing users to forge their own path.

VIAT has a dynamic proof of work where mining happens in two ways. Direct mining is the main method, while the second is through the use of packet puzzles in UDSP. Packet puzzles allow for passive mining while browsing on the Universal Web. Passive mining isn’t enabled by default. Situationally, packet puzzles come about when connection handshakes occur, connection liveliness checks, DDoS protection, congestion control, among other services that can be activated at a user’s discretion. Allowing for the opt-in of mining for packet puzzles means that no resources are wasted constantly mining when there is no need.

Make sure to check out this Internet 101 video series by Khan Academy:...